The opening remarks by CGHE Director Simon Marginson (Oxford) were a rousing call to arms, urging universities to look beyond current bipolar conflicts to develop a more collaborative world, in which UK universities would do more than just “work the British colonial circuit”, in a post-Brexit world of regions where UKHE might not have a region any more. Marginson segued into his introduction of the Burton R Clark Lecture, now a fixture in the CGHE Conference, and delivered this year by Bob Clark’s good friend Michael Shattock (UCL).

In his lecture on ‘University governance and academic work: the ‘business model’ and its impact on innovation and creativity’ Shattock previewed some findings from his latest book, to be published in July 2019. His research with co-authors Aniko Horvath (King’s College London) and Ellen Hazelkorn (Dublin Institute of Technology) in a range of universities in the UK had revealed accelerating diversity of modes and missions, and a trend towards ever more intrusive government policymaking. Governors who might once have been critical friends were now obliged to enforce regulatory guidance from the Office for Students, perhaps the thin end of a wedge of more lay intrusion into what is taught, and how. Paradoxically the idea of the student as customer barely featured in the almost dystopian landscape he painted, first of teaching and then of research. The metric-driven pressure to perform should not, said Shattock, be confused with Clark’s identification of a ‘strengthened steering core’ in the entrepreneurial university. (He would say that, of course, since the original strengthened steering core was probably Warwick’s during Shattock’s towering tenure as Registrar, but it doesn’t make it less true.) That core was closely connected to the academic community, whereas the current academic climate risked repressing rather than fostering academic innovation and creativity. The ‘English experiment’ with HE marketisation had reinforced executive governance; it was time to restore the academic community to its proper role as a key partner in governance. Questions and discussion pushed Shattock to a ‘back to the future’ position somewhat removed from his argument, as he was reluctantly driven to extol an Oxbridge model of governance by academics in contrast to the unduly top-down executive management and governance searingly exposed by his research. It was, nevertheless, a lecture which in a fitting way did justice to Clark’s legacy.

Next up the organisers had conceived a panel discussion on ‘Brexit, UK and Worldwide Higher Education’, not – as no doubt first planned – days after Brexit had actually happened, but on the day after a seven-hour Cabinet meeting had led to proposals for a further meeting, something Cornford surely wrote in Microcosmographia Academica. A post-Brexit Panel would have seemed like a good idea at the time, but now it fell rather flat, despite the best efforts of chair Ellen Hazelkorn (Dublin Institute of Technology) and engaging contributions from Nick Hillman (HEPI) and David Palfreyman (New College, Oxford and an OfS Board member), arrayed perhaps symbolically on the right wing of the panel (as seen from the floor). Lunch intervened before the second keynote from Marijk van der Wende (Utrecht): ‘On a Learning Curve: New Realities for HE in a Changing Global Context’. Her theme was the rise of China, probably soon to become the world leader in HE, and already surpassing the European Union in R&D spend, and the US in scientific output. It was a presentation informed and enlightened by much first class research evidence, but hindered by unreadably small text in many powerpoints, problems with the sound system, and a fire alarm which forced the hall to empty for 30 minutes halfway through her presentation. She was however able to rally and finish with an upbeat quote by the Rector of Leiden about Brexit not holding back the progress of scientific collaboration.

The CGHE team decided to make no concessions for time lost, their judgment vindicated by the continuing presence of most participants staying for the delayed finishing time after 6pm. They were drawn first by the parallel sessions reporting work in progress on some of the many CGHE projects, living up to the Director’s prospectus by offering multi-level global perspectives on public good, graduate skills and careers, sectoral evolution, participation, financing and equity, management and academic work, and more. Golo Henseke and Francis Green of UCL were developing a thesis that social skills were increasingly important for graduate earnings, drawing economic comparisons across Europe, and comparing European and US experiences. Vassiliki Papatsibas (Sheffield) and Simon Marginson were in the early stages of a project on ‘Brexit, emotions and identity dynamics’, where they had been taken aback by the emotional ‘turn’ their data had forced upon them. Does reason enable and passion disable? they speculated. (How else, I wonder, can we account for the flood of academic tweets seizing on every lone shred of evidence pointing to the iniquity of Brexit, from those who would otherwise be railing against government’s own attachment to policy-based evidence?). Aniko Horvath reported early stages in her research with Jurgen Enders (Bath) and Michael Shattock into the scope for negotiated local orders in university governance, drawing interesting comparisons between the UK’s legitimation of committees as part of governance structures, and Germany’s attitude, which regards the role of committees and working groups as at best questionable.

In the final plenary Paul Ashwin (Lancaster) spoke with research-informed passion on ‘Transforming University Teaching’. Oversimplified accounts of the educational process make us lose sight of the educational arguments for undergraduate education. Too often we mistake privilege for ability, and prestige for quality. Justifying HE in terms of generic skills is reductionist, and purporting to explain HE in terms of signalling for employers simply reinforces the iniquitous force of global rankings and institutional prestige. Instead we should recognise that universities are the distinctive custodians of structured bodies of knowledge, and teaching is about designing ways for students to develop access to one or other of those bodies of knowledge – that is how teaching may truly be transformational. This is a continuing process of hard intellectual work: we need to change ourselves and our curriculum, not expect students, managers and policymakers to change so we can stay the same.

Thus the conference ended as it had begun, with a call to put education back on centre stage – in these troubled times that is indeed challenging higher education. 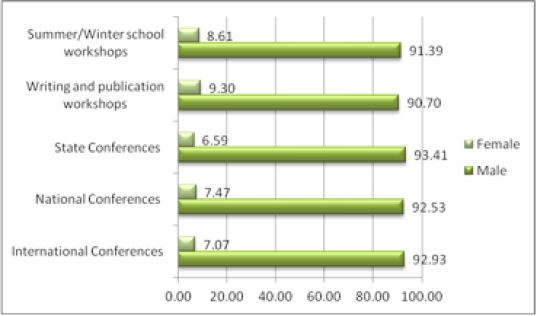 Figure 1: Participation in Conferences by Gender (in a high-prestige institution)

EH: Nidhi, can you explain first of all where conferences come into your wider research on inequalities in Indian higher education?

NS: Equitable access to professional development opportunities such as conferences is an indicator of institutional commitment to achieving diversity and inclusion of diverse social groups on campuses. END_OF_DOCUMENT_TOKEN_TO_BE_REPLACED

In this post, Dai O’Brien discusses spatial and temporal challenges that deaf academics face when attending conferences, and presents some preliminary thoughts from his funded research project on deaf academics. This post is accompanied by a filmed version of this post in British Sign Language.

Attending conferences is all about sharing information, making those contacts which can help you with research ideas, writing projects and so on. This is the ideal. However, END_OF_DOCUMENT_TOKEN_TO_BE_REPLACED

The Annual Conference of the Centre for Global Higher Education on 11 April was enough to reassure anyone that research into HE is in rude health. With a globally diverse audience of 250 or more at the UCL Institute of Education to talk about The new geopolitics of higher education, it was time well spent. END_OF_DOCUMENT_TOKEN_TO_BE_REPLACED

Emily Henderson writes on fulfilling her dream of convening a symposium on conferences research at the Society for Research into Higher Education annual conference.

This post was first published on Emily’s blog, https://conferenceinference.wordpress.com and is reproduced here with the author’s permission.

When we set out to create an academic blog on conferences, it was in part because conferences research is so disparate – in terms of discipline and geographical location. The Conference Inference blog has provided us with a wonderful platform to share research and comment on conferences over the course of 2017, including from a fantastic array of guest contributors – and we will be thinking more about this first year in our 1-year anniversary celebrations in early 2018. However this post reports back from a very special treat – namely, five papers on conferences grouped together in the same room at a conference! The symposium, entitled ‘Academics in the Arena: Foregrounding Academic Conferences as Sites for Higher Education Research’ (see information here, pp. 25-27) brought together a variety of critical perspectives on conferences, along with a discussant contribution from Helen Perkins, Director of SRHE (Society for Research in Higher Education).

The first paper presented early analysis from an ongoing research project on fictional representations of conferences by Conference Inference co-editor Emily F Henderson and guest contributor Pauline Reynolds (see Pauline’s guest post). The paper, entitled ‘“Novel delegates”: representations of academic identities in fictional conferences’, focused in particular on academic identities at conferences as they are portrayed in novels, short stories and graphic novels. Fictional conferences act to both equalise and reproduce academic hierarchy; delegates are homogenised as masses and crowds, uniformly badged and seated, just as delegate-professors are singled out for VIP treatment and delegate-students are denied access to certain spaces and conversations. END_OF_DOCUMENT_TOKEN_TO_BE_REPLACED

I wasn’t sure what to expect from the SRHE Newer Researchers conference. The day began with Mike Neary’s thought provoking keynote on ‘students as producers’. He explained this as an act of resistance to ‘students as consumers’ rather than ‘student engagement’ or ‘student-led teaching’. We were then thrust into a very full day of research seminars, all supported by an active twitter back channel.

The conference organised the presenters into END_OF_DOCUMENT_TOKEN_TO_BE_REPLACED

To put forward an article for consideration to be published on this blogsite, please e-mail the editor rob.cuthbert@uwe.ac.uk with rob.gresham@srhe.ac.uk in copy.

The opinions expressed by the contributors to this site and those providing comments are theirs alone, and do not reflect the opinions of the Society for Research into Higher Education (SRHE) or any employee thereof. The SRHE is not responsible for the accuracy of any of the information supplied.